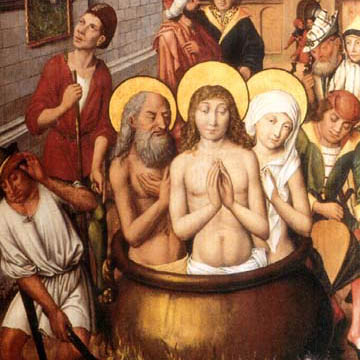 Vitus, Modestus and Crescentia were martyrs under Diocletian. The earliest testimony for their veneration is offered by the “Martyrologium Hieronymianum” (ed. G. B. de Rossi-Louis Duchesne, 78: “In Sicilia, Viti, Modesti et Crescentiae”). The fact that the note is in the three most important manuscripts indicates that it was also in the common exemplar of these, which appeared in the fifth century. The same Martyrologium has under the same day another mention of a Vitus at the head of a list of nine martyrs, with the statement of the place, in Eboli, “In Lucania”, that is, in the Roman province of that name in southern Italy between the Tuscan Sea and the Gulf of Taranto. It is easily possible that it is the same martyr Vitus in both cases.