January 8, 1920 – December 18, 2012 Monsignor Joseph E. LeFort passed away after a lengthy illness on Tuesday, December 18, 2012. He was the son of Henry and Adelaide (nee Beausoliel) LeFort and was born at Medicine Hat, Alberta on January 8th, 1920. He was educated at the Catholic schools in Medicine Hat and graduated from St. Theresa’s Academy in 1939. Monsignor did his philosophy studies at St. Joseph’s Seminary in Edmonton, and received a Bachelor of Arts degree from St. Patrick’s College, Ottawa. He completed his theological studies at St. Augustine’s Seminary in Toronto, and was ordained to the priesthood by Bishop Francis Carroll in l945 at his home parish, St. Patrick’s, Medicine Hat on May 13, 1945. Monsignor LeFort served as the Bishop’s Secretary and Chancellor of the Catholic Diocese of Calgary from l945 until l959, and also served as administrator of St. Joseph’s parish for a period of six months. In l959 he was appointed pastor of St. Ann’s parish, Calgary. He also established St. Bernadette’s Church as a mission of St. Ann’s. In l967 Monsignor LeFort became the founding pastor of Canadian Martyrs Parish in Calgary and in l982 he was appointed pastor of Sacred Heart parish, Calgary. Besides his parish duties Monsignor LeFort served in many capacities in the Catholic Church of Calgary, including Director of Religious Education and Chairman of Catholic Charities, and served on many other committees and boards. In the community Monsignor was the first National Director of the John Howard Society of Canada, and served on the board of the Canadian Mental Health Association. He was also an active member of the downtown Lions Club. He enjoyed the Arts and was an avid Bridge player, reaching the status of “Grand Master”. Among other activities, he was a great supporter of the Precious Blood Sisters and played a very active role in the establishment of their present monastery in the Erlton Community. Monsignor also served on the board of St. Mary’s University and was instrumental in raising donations for the young University. In recognition of this, the LeFort Centre at St. Mary’s is named for him. Monsignor Joseph LeFort is survived by two sisters, Philomena Whitesell of Washington D.C. and Theresa Litschke of Calgary. He is also survived by six nieces and two nephews and their families. 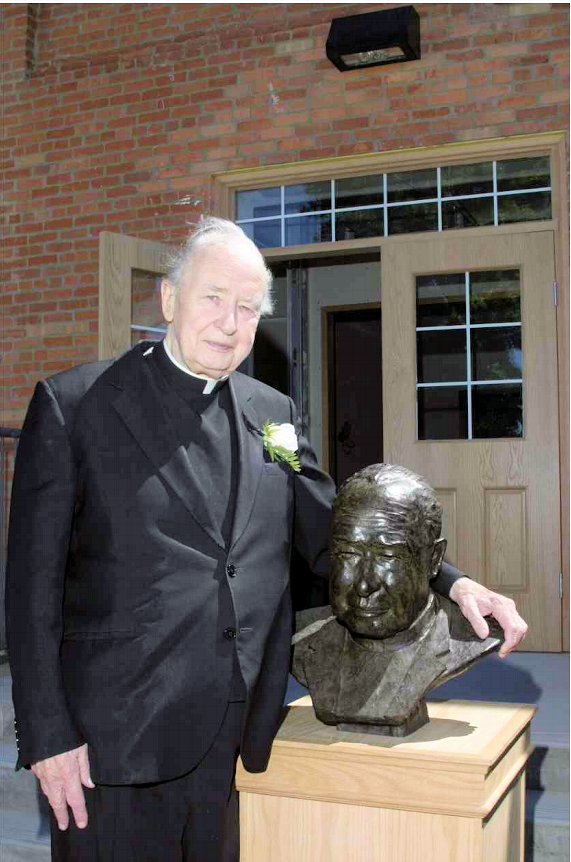 Joseph E. Le Fort (born in Medicine Hat, January 8, 1920) was one of the many visionaries and builders in post WWII Calgary. He came to Calgary in 1945 where he was ordained May 13th. Initially he served as Secretary to Bishop Carroll for 7 years, and then became Chancellor of the Diocese for another 7 years – during which he was elevated to ‘Monsignor’. In 1959 he became Pastor at St. Ann’s Church (916 – 21 Ave. SE) and was  here until 1967. That year he moved to Canadian Martyrs Catholic Parish (835 Northmount Drive NW) where he established the Parish and built the church. In 1982 Father Le Fort moved to Sacred Heart Church (1307 – 14 St. SW) where he served until 1990 – the year of his retirement.

Msgr. Le Fort has a longstanding interest in bridge, going back to his teenage years in Medicine Hat. (Carl Forner, a longtime and frequent bridge partner of Le Fort, also grew up in Medicine Hat, although the two did not meet until living in Calgary). While at Canadian Martyrs with the encouragement of Jack Murphy Msgr. combined his interest in bridge with the availability of space and an opportunity for fundraising by creating the Canmar (derivative of ‘Canadian Martyrs’) Bridge Club on May 7, 1973. Starting with 1 afternoon game weekly, Canmar quickly expanded to evening (Monday and Thursday) games and eventually grew to games of up to 3 sections. The inaugural Committee behind Canmar included bridge enthusiasts Lil Murphy, Rita Allen, Anne Romanzin and Noemi Chiess. When Msgr. Le Fort became Pastor at Sacred Heart Church, Canmar relocated with him and the games were held in the basement there until about 1993. Sacred Heart eventually needed the space for other purposes and Canmar relocated to the South Calgary Community Association (3130 – 16th Street SW) for about 2 years, and (following a few months when the club held no games) in 1996 Msgr. Relocated Canmar to St. Joseph’s Church (640 – 19 Ave. NW) for a few months. Neither of these last two spaces was totally satisfactory and Canmar was disbanded in September of 1996, with players gravitating to Martinique and other clubs. As a matter of interest, Father Le Fort played a key role in the Martinique’s relocation to its current location, the Knights of Columbus Hall – Martinique was looking for new space and Le Fort became aware of the availability of the KoC facility, linking the two parties.

In 1981, Le Fort enjoyed a 1-year sabbatical in Rome and played a lot of bridge while there – in one game against Benito Garozzo and his partner. However intimidating world class players such as Garozzo, and the somewhat disorienting bidding system of the Italians, Le Fort recalls the most intimidating part as the late (9:30 pm and later) start of games and the inevitable long walk home well after midnight.  Central to the success of any bridge club is a strong cadre of Directors and Canmar had its share of Director talent. Marguerite (Swanson) Perry was the inaugural Director, followed by Stan Matheson., Steve Bates, Vaughn Johnson, Doris Fishman, and Carl Lawless. In addition to directing, Steve managed the club for several years (1982 to 1986/7).

Those who played at Canmar describe Msgr. as follows: very keen about bridge (whether duplicate, rubber bridge, or bridge cruises); a gentleman; competitive; affable; very well liked; dedicated to the community.

Monsignor had a most persuasive way about him — he was a master of energizing volunteers. Carefully selected words such as “will you be bringing a turkey for the December game” and “I’m suggesting you as Treasurer because we really need a second signature” were very hard invitations to say ‘no’ to. He also had a wonderful way of sensing friction and finding the right words to defuse it. Many a couple would move for the next round in hot discussion of previous bidding or play only to have the sparks neutralized with Monsignor’s gentle ‘welcome to our table!”

Msgr. Le Fort achieved Silver Life Master in 2005 and continues to play bridge, sometimes at Bob’s Bridge Club Sunday game, and mostly at a social game in his retirement home at Lake Bonavista Village. His view is that “duplicate bridge is a world of its own, and through it one makes many very good friends”. Several Unit 390 members were present at the diamond jubilarium of Msgr. Le Fort’s ordination
in September 2005.

On June 30, 2007, the old Father Lacombe building on the campus at 14500 Bannister Road SE re-opened after its $1.5 M to $2.0 M refurbishing including
renovations and expansion of the bookstore, cafeteria and addition of a new classroom. It was renamed the ‘Monsignor Joseph Le Fort Centre’ and a bronze bust
of Msgr. Le Fort is at the entrance. Congratulations Msgr. Le Fort, and thank you for the many opportunities you provided for the Calgary bridge community Msgr. Joseph E. Le Fort at the opening of Le Fort Centre, June 30, 2007.

Courtesy of St. Mary’s University College.
Who would have thought that a key catalyst for the expansion of duplicate bridge in Calgary was a Roman Catholic Priest?